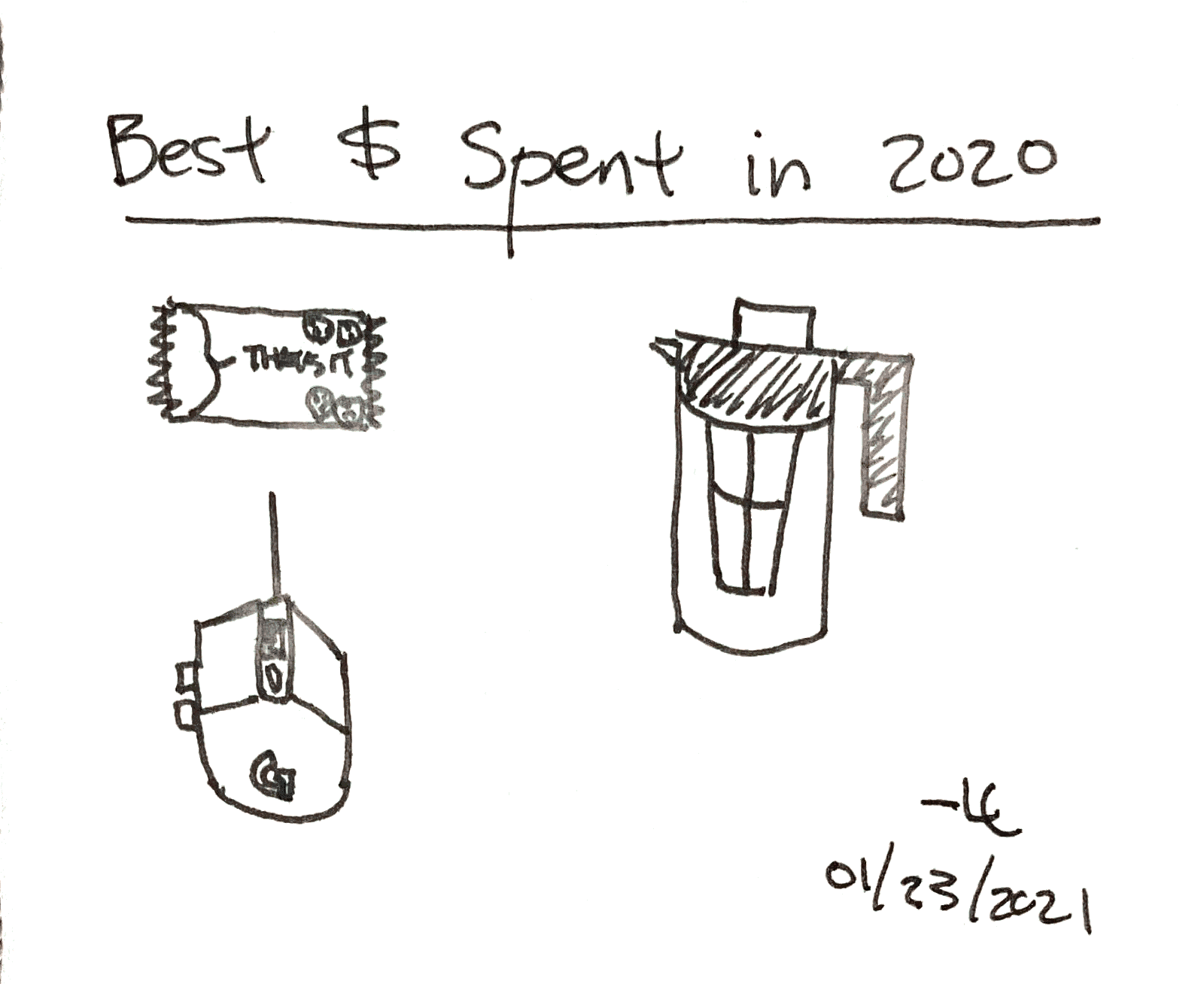 A recent wrinkle to my Past Year Review (PYR) is adding purchases to the list of activities, commitments, and people that produce the most positive and negative emotions. I decided to shorten that list and highlight my favorite purchases of less than $100.

COVID became a global concern in March 2020, right as I was about to take a trip to Japan. Not all the information had been released about the virus at the time. I was still planning to go on the trip but wanted peace of mind. So I bought trip insurance to cover the potential medical costs. I ultimately decided not to go and had to forfeit the $23. I don’t regret buying the insurance as it mitigated one of the biggest risks of the potential trip.

I started the season watching NFL Red Zone through free streaming sites. I got fed up after two weeks and decided to join a YouTube TV family plan with NFL Red Zone. I paid over $90 for something that I could have watched for free. But I didn’t have to search for the links, worry about malicious sites, or have the feed cut off halfway through the broadcast. I would happily pay for NFL Red Zone every season for the convenience and reliability.

I bought this video game to play with friends over Zoom. For those unfamiliar, JackBox offers party games played through the web browser. This makes it the perfect game to be played over video chat. My friends and I had a blast playing Trivia Murder Party 2 and Push the Button. There were lots of laughs and a little bit of saltiness from being accused as the alien.

My fiance’s sister recommended these bars as a healthy snack. These bars are made with only two ingredients, usually apple paired with another fruit. And that’s it! I guess that’s where the name came from. My favorite is the strawberry flavor. I eat a mini bar almost every day between breakfast and lunch. You can find a variety bag of the mini bars at Costco for a reasonable price.

I bought this accessory when I switched over to the iPhone SE 2. I wish I had bought this device years ago. The convenience of Bluetooth car audio is well worth the money. It automatically pairs with my phone when the car is turned on. All I have to do is press play on my phone instead of fumbling with the aux cord every time I get into the car.

I switched from drinking green tea to cold brew coffee during the summer months. I wanted to drink something cool during the hot mornings. I also needed extra caffeine to get going in the morning. This carafe made brewing cold coffee easy and filter free. My favorite coffee to cold brew is the Illy Classico .

I pulled out my old gaming mouse and keyboard to use while working from home. This setup worked great for several months until my mouse broke. The mouse kept double clicking when only pressed once. This made working with 3D models and editing pdfs difficult. I bought this Logitech gaming mouse to replace my old mouse. It has been smooth sailing since; the clicks feel solid and precision is top notch.